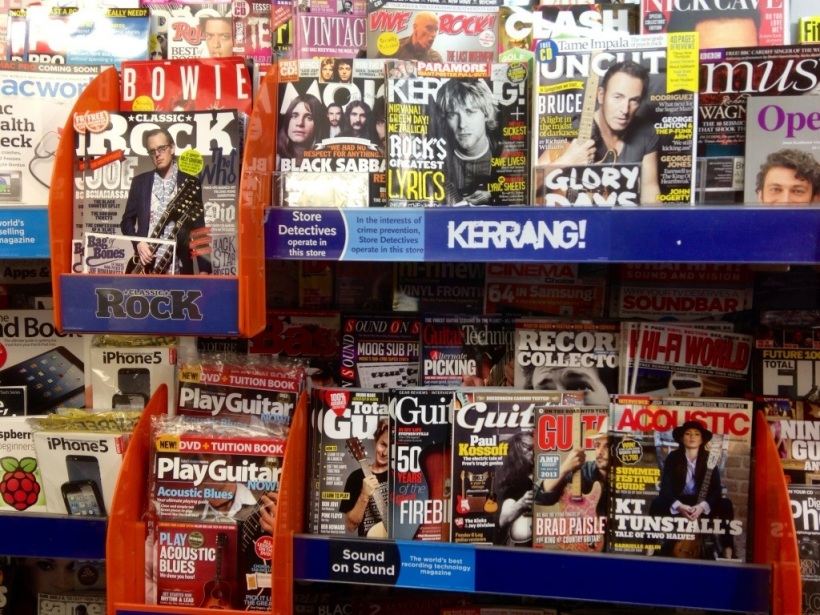 Where I live and work in the St Annes-On-The-Sea part of Lytham St Annes, when this supposed summer’s day is beset by strong winds and drizzle, there isn’t really much to do during the lunch break other than have a browse around the local branch of WH Smith. It’s not one of their bigger branches but they sell a selection of books, magazines, cards and stationery, much as you would expect from any branch of the ubiquitous newsagent. I must visit 3 or 4 times a week just to kill a few minutes by browsing a book, flicking through a magazine or scanning a newspaper. It’s repetetive, certainly, and a long stretch from the days when I worked in cities such as Leiceter, Nottingham and Manchester with a myriad of shops and walks to make the lunch hour a worthwhile escape from the goings-on in the office. But if there is one thing that strikes me, even in the modest surroundings of our local ‘Smiths’ is the abundance of music magazines on sale these days. I remember when I was an avid music fan in the 1970’s you were pretty much limited to a choice between the New Musical Express (or NME as it became popularly known), Melody Maker and Sounds. Sounds used to be my paper of choice, delivered by the local newsagent on a Wednesday morning because of its coverage of rock and heavy metal which I was particulalry ‘in to’ at the time. Melody Maker continued to hang on to it’s pre-punk hippy roots and the NME, which by its own admission was late onto the punk scene made over-zealous amends for its past musical lethargy by becoming the paper for punks, post-punks and anything which chimed with two thirds of its abbreviated title, new and musical. There was also The Record Mirror but that didn’t seem to linger for long and if I remember correctly got swallowed up by Melody Maker. With the New Wave Of British Heavy Metal, or NWOBHM, in full swing by the late 70’s and early 80’s, Sounds’s champion of all things heavy, Geoff Barton (or Def Barton to his mates) was the must-read music journo for all things metal back in the day; apart from his habit of awarding any Kiss output, no matter what the quality (Unmasked, anyone?) a fabulous 5 stars out of 5 including two awards of 6 out of 5 (seriously) for 2 of the 4 solo albums the Kiss members produced at the time (Paul Stanley and Gene Simmons if I again remember correctly).

By the mid-80s both the Melody Maker and Sounds appeared to have lost their way by hanging on to old trends whilst the NME which managed to keep abreast of the fast pace of youth culture of the period (The Smiths!) and as Melody Maker and Sounds disappeared from our Newsagents’s shelves, The NME had a near monopoly on quality music journalist publication. For the pop afficionados, Smash Hits ruled the shelves but it was the NME which spawned a host of fine writers that achieved the longevity which still sees it appear on our newsagent shelves, albeit in glossy magazine format today. Some of those old NME journalists went on to form new magazines such as Q which now captures that BBC 6 Music audience which crosses the divide between the best music of yesteryear while having the confidence to promote the best and worst of new artists amongst their output. A decade or so ago came magazines like Mojo which seemed to be aimed at the old Melody Maker crowd while readers of Sounds emigrated to its then sister magazine Kerrrang, aimed at the old metal heads. All 3 sit crowdedly vying for space on the shelves of a CTN (concectioner, tobacconist and newsagent) near you! I mean, just look at the photo…there are magazines for every genre of music, new and old, classical and pop with specialist publications for musicians and collectors. God knows what the circulation figures are for Acoustic, but there it sits alongside 4 other specialist guitar magazines…and good luck to it to, it’s good to see a wide range of magazines for sale in a sleepy seaside town catering for all tastes in readership in this digital age.

I don’t buy magazines as often as I’d like but there are some great choices out there amongst the music, fashion, food and lifestyle. I tend to go for Q magazine when I choose a music mag but I’m not an avid reader. The NME is still there even though I last bought it in Christmas 2011 but long may they sit there and be read, championing live and new music because it would be a lot gloomier world without them!

One thought on “I’ve got your music”